BREAKING: Ajadi places party above self, steps down for Rabiu Kwankwaso

May 27, 2022 BREAKING: Ajadi places party above self, steps down for Rabiu Kwankwaso

Presidential aspirant under the platform of the New Nigeria People’s Party, (NNPP), Olufemi Ajadi on Thursday, May 26, 2022 demonstrated true loyalty to his party to stepping down his bid for the presidency.
He is now to serve as running mate to Sen Rabiu Kwankwaso. 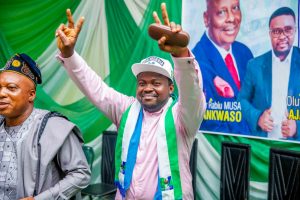 Ajadi announced the stepping down before a mammoth crowd of party supporters and other Nigerians at the Iwe Irohin, Abeokuta today.

Describing the event as epocal, he said it would mark a real move in emancipation of Nigeria from bad leadership.
Lamenting wide spread suffering in the land, he blamed it on bad leadership asserting that the country was already blessed such that her citizens should not suffer.

.
“Nigeria is a country that God Himself has blessed, but look around you today, you will agree with me that things are not working well.

“There is hunger in the land, even though Nigeria has arable land and a variety of foods and crops.

“There is insecurity in the country, even though there is an elected government, with the Police, the Army, Navy and Air force.

“Our children finish school and there are no jobs.
Is it a wonder that there is crime everywhere?

” Roads are in terrible condition and there is no public water supply, no electricity, and all the necessities of life. But we have a government.
We have billions of naira in cash and assets.

“I now ask, what is the missing link?
Distinguished Nigerians, the missing link is Selfless, sincere, and servant-based leadership, guided by the highest sense of equity and fairness.
That is what we in the NNPP have come to offer,” he said.

“Ladies and gentlemen, that is why, I, OLUFEMI AJADI OGUNTOYINBO, having considered many things, and in the interest of our great party and beloved country, today, relinquish my presidential ambition, to support the presidential candidacy of Senator Rabiu Musa Kwankwaso; it is all in the interest of our party and our country.
You know Senator Kwakwanso is a great Nigerian, accomplished politician and administrator who will lift this country.

“I pledge my loyalty at all times to the course of serving our party and country first as a presidential running mate and eventually vice president of the Federal Republic of Nigeria,” he added.

The Ogun State chairman of the party, Olaposi Oginni, had earlier described Senator Rabiu Musa Kwankwaso as God-sent for the purpose of rescuing Nigeria.

He also extolled Ajadi’s qualities, saying that all along he had been been propagating the party positively, and also believed fervently about the unity of Nigeria.

He reiterated that Ajadi has met with notable Nigerians on this same course, including Obas in Southwest: Olu-Ibadan, Oni of Ife; Olufi of Gbongan and just met with the Are-OnaKakafo of Yorubaland, Alhaji Gani Adams.

He said, “Ajadi has arranged today’s event on how to move the party forward with the support of the national leader, Rabiu Musa Kwankwaso and with other Southwest Leaders.”

He added that all the Southwest members jad met and reconciled with the aggrieved individuals to move the party forward.

“In the meeting which all the southwest party chairmen held, we had unanimously agreed to maintain the Southwest present position in Nigeria‘s government which is the position of Vice President of the nation,” he said.