A Chieftain of the all Progressives Congress (APC) in Bauchi State, Alhaji Yarima Giade,has called on all the delegates of the apc to vote for Amb. Abubakar Baba Sediq (rtd) in the party‘s Gubernatorial primaries schedule for Thursday May 26,2023. 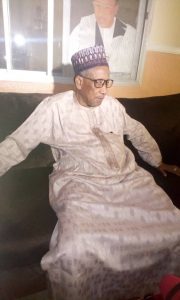 According to Yarima, Amb. Abubakar Sediq has all it takes to pick the party‘s Governorship ticket after reaching out to  a sizable numbers of the delegates.

Alhaji Yarima Giade also claimed that the all progressives Congress will unseat the ruling party   the people’s democratic party ( PDP), in the 2023 Governorship election, adding that the APC has a firm grip of almost all the elective position in the state, particularly the three Senatorial seats, Eight house of respresentatives seats and two third of the state assembly seats in the Bauchi State House of assembly.
Alhaji Yarima further stressed that his support for the candidature of Amb. Abubakar Baba Sediq (rtd), was based on his competence, capacity and popularity which are all necessary and indispensable in electoral contest.