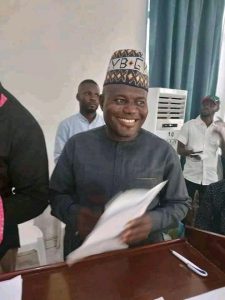 The election which was conducted on Friday inside the Amusement park in Lokoja, under tight security , had 105 accredited delegates which at the end of the voting, three votes were voided.
Speaking to Journalists at the end of the exercise, the Honourable Commission for Solid Minerals and Sarkin Yaki of GYB to PYB . Engineer Bashir Gegu commended Governor Yahaya Bello for creating prevailing atmosphere for democracy to strive as demonstrated by the outcomes of the election.
The Commissioner noted that Hon. Danladi Suleiman Aguye deserved to win as he has shown his dedication, commitment and loyalty to the party.
According to him, the winner has displayed high level of understanding of politics as he went about his electioneering campaign with decorum, and maturity.
He commended the delegates for orderly conduct during the voting process affirming that the election was free from rancour and violence, which he said, is a model for elections in the state.

He appealed to the contestants to accept the result and work with the winner and the party to win the forthcoming general elections.
He advised that in every election one person must win, therefore, they should consider themselves as brothers and one indivisible political family.