The Evbuoriaria Magistrates Court II sitting in Benin City on Thursday dismissed the case of assault against the Iyasere of Warri Kingdom, Chief Johnson Atselueghe, over alleged assault on octogenarian, Madam Grace Tietie. 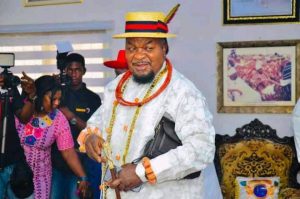 Chief Johnson Atselueghe,
was charged for unlawfully assaulting Chief Grace Tietie
84, the Keke of Ologbo Dukedom in Ikpoba-okha Local Government Area of Edo state ,by beating her up with fist blows and inflicted injuries on her head.

The offence contravened Section 351 of the Criminal Code Cap 48 Vol.11 Laws of the defunct Bendel State of Nigeria, 1976, as applicable in Edo State.

The Presiding Magistrate, Mr Festus Okoro, said the prosecution has failed to prove his case before the court.

According to him, the Investigation Police Officer, IPO, told the court that the allegations of assault against the defendant were all false.

He clearly proved that there were no harm which the complainant confirmed that she did not go to hospital.

Also, Pw2 which is the woman’s son told the court that what he wrote in his statement where all hear say,as he was not there on the day of the incident.

Magistrate Okoro said the court cannot reliance on hear say as it is not admissible in law and so dismissed and acquit the defendant accordingly.

Reacting to the judgement, defendant’s counsel, Pius Oiwoh said it was a thorough judgement delivered by the magistrate.

According to him, the judgement was so perfect that all lawyers in court that moment were overwhelmed with the perfect delivery.

Barrister Oiwoh further stated that , the Prosecution never had a case as it was just a mere allegation out of hatred.