Just a few hours after a facelessly sponsored and poorly schooled individual or group of individuals did a hatchet job through a sponsored report by Sahara Report whose trade and penchant for distractive news report is legendary, the same group are out this time with another dirty and unprofessional hatchet job. humm, very laughable! 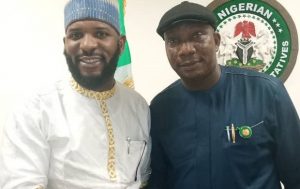 One of the greatest weapons of losers in every contest is their damage tactics with which they use to distract their competitors. Worst still, is the fact that people who lack capacity to effectively compete with their counterparts especially in political contests where they use blackmail, fake news, disinformation, propaganda and other tools to press home their ponts.

Unfortunately, this does not work with every person, especially those that had the singular opportunity to be politically tutored, natured, cooked, beaked and mentored by one of Nigeria’s greatest and experienced political tactician of blessed memory, Prince Abubakar Audu, under whose tutelage Hon. David Zacharias acquired practical political and leadership orientation from for several years of political apprenticeship.

Responding to a factious, false, annoying, misleading, highly ungodly and irresponsible news of alleged attempt assassination of Prince Mustapha Audu by Hon David Idris Zacharias is out of humility, respect for the gullible-innocent audience who can easily be carried away by the total misinformation and falsehood being circulated in some sections of the media by Prince Mustapha Audu, deliberately aimed at smearing the hard earned reputation of Hon. David Zacharias and to distract him from the last minute permutations ahead of his primary elections.

But to even think that Mustapha Audu, considering the level of dignified training his father must have offered him will go so petty simply because he wants to occupy a political position simply tells how far people can throw away morality for political gains.

The response that is being provided here is to guide men and women of goodwill, supporters and party members of good conciseness to be wary of the deflection tactics deployed by Prince Mustapha Audu and his associates who are already grappling with the realities of the failure that awaits them at the primaries.

Before setting the records straight, let it be on record that, all the contents of the letter being circulated with the accompanying news item is a pure and applied lie from the pit of hell.

To set the records straight however:

Hon. David Zacharias received a phone call from Prince Mustapha Audu on 14th May 2022 when the party was holding screening for a set of its aspirants at Fraser Suites Hotel, Abuja requesting to see him. Knowing full well that he, Mustapha is his constituent who has had such courtesy visits previously, obliged him to meet him at the venue where he was to see the governor.

At that meeting, Mustapha Audu told Hon. David Zacharias the relationship that existed between the national chairman of the APC, His Excellency, Alhaji Abdullahi Adamu and his late father, Prince Abubakar Audu. He noted that his father and the APC chairman were good friends and that now that Adamu Abdullahi has emerged chairman of the party, Adamu told him he wants to reward Prince Abubakar Audu by making sure Mustaph Audu, late Audu’s son occupies a political position in Kogi State.

According to Mustapha Audu in that meeting with David Zacharias, he came to speak to Zacharias to pacify him to allow him, Mustapha contest the position since he was already sure of clinching the position. He went further to boost that, to pave way for him, the APC national chairman who is an uncle to his wife, ensured that his wife emerge as zonal women leader of APC to pave way for his emergence.

In his characteristic nature and for those who know David Zacharias, will attest to his gentleness, meekness, welcoming, lovely and calm manner of addressing issues. Having appreciated him for the courtesy accorded him, Zacharias in his exact words said: “Since it is a contest, stepping down for you would not be necessary. Let us go to the pools, if you win, I will give you my support and if I win, then you support me”.

The duo cracked jokes and both of them parted ways that day and nothing was said after this. Not even mentions of the national chairman from Zacharias talk more of alleging to kill the national chairman. This is coming from a man who wants to assume a leadership position by causing disaffection, disunity, crises and unnecessary tension.

Even by the poorly scripted, uncoordinated manner of presentation of lies and the incoherent nature the story appeared in public space, it is already crystal clear that Prince Mustapha Audu needs to save himself of the shame and embarrassment caused by publication which rather than attracting sympathy, has made him an unserious comedian before Kogites and those he seeks to get sympathy from

On the allegation for assassination attempt on him, one begins to wonder the person that drafted the poorly acted script. It is important therefore to review some of the lies told in the letter sent to the police and subject the same to public scrutiny and testimony.

In the letter Mustapha alleged that Hon. Idris Zacharias threatened his life, the life of his wife and his fellow colleague that was in the meeting. He went further to allege that Zacharias said he was going to use fetish means of attack or derail his project and has so far been bragging that he has begun his attack.

These allegations are very childish and have no bearing to Hon. David Zacharias by any means. David Zcaharias is a good Christian who is not just a church goer, but has a personal relationship with God. It is wise to say that Mustaph should be ready to provide concrete audio-visual proofs to the allegation of threat to life and other forms of lies being told to attack unnecessary and undesirable sympathy.

It is also important to state that the Joint Task Force who intervened by informing Mustapha and his team ahead of time of a planned assassination tempt on him should do further and provide the security agencies with well verified, empirical and acceptable intelligence of his report or claims.

As a law abiding, responsible and father to many, David Zacharias will be disposed at all time to provide insights to these allegations when invited but wants the general public to be wary of a man who wants power at all cost. The memories of the blackmail in 2019 when Mustapha wanted to be governor at all cost, the planned dethronement of the party’s caretaker extraordinary convention planning committee which led to his suspension from his Ogbonicha ward and other acts of grandstanding are not new to David Zacharias.

Rather than appreciate, pray and commend the man whose four years in office is littered with plethora of infrastructural development, women and youths empowerment and other developmental indices, the Pull Him Down syndrome is now on display here.

Finally, we wish to remind Mustapha Enemona Audu of his own words when in 2019 he came to honor David Zacharias’ first massive empowerment that “ I came to join you in celebrating the good thing you are doing for our people because you are the first lawmaker in the history of this constituency that is thinking like my father by providing for the people”

Going further, Mustapha said “I am providing free scholarship to some students under my scholarship scheme in support of your good work and we will collectively fight any one who fight you”

So, the question is what has changed! Mustapha must be conscious of the fact that leadership comes from God and that no man takes it by force because nobody knows tomorrow.

We therefore urge the general public to be wary and by this rejoinder, completely, totally and honestly disregard the lies, concussion, false narratives, misinformation, antics and schemes to distract and discredit the previous work done by Zacharias and take his mind away from the success coming ahead.

We urge Mustapha to be aware that he is bringing the principles of the chicken, “what it does not eat, it scatters”

Leave this antics and let’s meet at the polling unit where real men are distinguished from boys.