PKK FEDERAL CONSTITUENCY 2023: I WILL SUPPORTS THE WINNER, IS A VICTORY FOR THE PARTY – Hon. Chikas Kumle.

An aspirant for the panshen/Kanka /Kanam (PKK), federal Constituency of plateau State, in the just concluded house of representatives primary elections, Hon. Chikas Kumle has promised to support Hon. Chrysanthus Ziphim John, Who was declared winner of the house of Representatives primary elections of the people’s Democratic party (PDP), of the Panshen/Kanka/ Kanam federal Constituency. 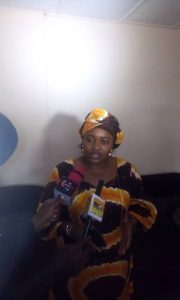 Hon. Chikas who stepped down for other eight aspirants in the election that was keenly contested, disclosed this to Newsmen shortly, after Hon. Chrysanthus Ziphim was declared winner at the party office in Panshen, plateau State, where the election was held, Tuesday May 24,2023.

Hon.Chikas Kumle Who further described the victory as a victory for the party, said she would mobilised all resources at her disposal to support the party‘s flag bearer to ensure landslide victory for the party in the 2023 general elections, adding that the election was a family affair and as such all the aspirants would work in unison for the success of the party in all elections, she said.
” it is the spirit of sportsmanship and interest of our party that made me to step down my aspiration, believing that others can still give the people of Panshen/Kanka/Kanam federal Constituency the desired representation.”

She called on the people of the State to vote out the rulling all Progressives Congress ( APC), in next year’s general election, saying that the rulling APC was a collateral failure.