… Frowns Against Use of Uncomplimentary Remarks 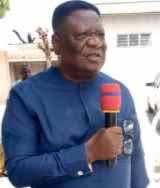 The Kogi State Deputy Chairman of the Peoples Democratic Party, Hon. Sam Abenemi has called on members of the party particularly those from the Western Senatorial District to work towards a united Kogi West PDP, warned against the use of unsavory remarks aftermaths of the PDP primaries.

Hon. Sam Abenemi made the remarks while reacting to ongoing comments and unsavory remarks in some section of the online media against the second running, described it as unacceptable.

Hon. Sam described the primaries as a game that produced winners, cautioned supporters against making comments that would not argur well for the party.

Hon. Abenemi urged the contestants to call their supporters to order, cautioned against overheating the process and the polity, insisting that there is more work to be done with everyone needed on board in the coming days.

He noted that the Kogi West Senatorial District primaries was a no victor no vanquished contest, commended the participants for their show of sportsmanship who ran the race with their heads held high above their shoulders.

The Deputy Chairman who also hail from the West Senatorial District, congratulated all the contestants who participated in the Primaries, described the contestants as world class contestants the PDP remains proud of.

Hon. Abenemi described the game of politics as one that is all inclusive, said it is always a matter of time to win and another time to lose, but said it is one process that always require everyone on board, reason why it would be counter productive to make unsavory remarks aftermaths of any process as everyone would be needed moving forward in the general election.