An NGO, Ayo Adun Foundation (AAF) and Millennium Christian Ministry in collaboration with the Federal Road Safety Corps (FRSC), on Monday sensitised road users on the need to obey traffic rules and regulations to ensure safety and reduce crashes on highways. 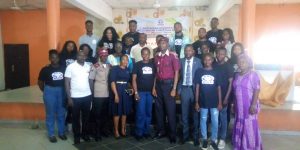 Speaking at the event tagged: ”Road Users Sensitisation Campaign” in Lokoja, the Executive Director of AFF, Mrs Mercy Adun, said the sensitisation campaign was organised in honour of his husband, Pastor Ayo Adun, who was a victim of road crash. 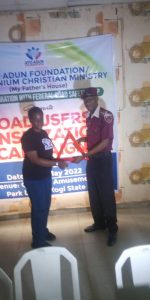 She explained that her husband passed-on on December 26, 2021, as a result of a fatal accident he had on May 23, 2021, when his vehicle ram into a stationed trailer at night with no caution signs.

She noted that the husband sustained brain injury from the crash which they battled for seven months before he eventually passed-on December 26, 2021.

”As the founder of Millennium Christian Ministry, my husband touched many lives, his driving force was affecting and impacting lots of lives during his lifetime.

”We didn’t want his vision of his so passionate about humanity to standstill and I believed that was his desire too.

”We are carrying on with his vision of impacting and affecting lives positively by shining the light of God in the dark areas of society,” she said.

He commended the foundation for dimming it fit to organise such loudable program for the road users, as contributing their quota of corporate social responsibility to the society.

He emphasised that driving required total concentration, avoid distraction, saying until we know this and do it, it will be difficult to ensure safety on highways.

According to him, there are three major causes of road which include Human, Environmental and Mechanical factors, but there is no crash on highways that does have human input.

He noted that causes of road crashes include: over confidence, over speeding, distraction, overloading, lane indiscipline, route violation, bad tyres and driving under the influence of alcohol, among others.

He, therefore advised road users to ensure absolute compliance to all traffic rules and regulations to ensure safety on roads.

He further urged motorists to avoid night journey by all means for their own safety, stressing that travel at night should not be promoted.

In his goodwill message, Mr Nathaniel Abaniwo, Coordinator of Kogi NGO’s Network (KONGONET), commended AAF for the initiative, and urged them to approach the objective with all level of seriousness and dedication.

He thanked AAF for giving him the opportunity to be part of the event, while assuring the foundation of the total support of KONGONET in the state.

The highlight of the occasion was the presentation of road safety items such as caution signs, reflectors for cars, tricycles and trucks, to FRSC for onward distribution to road users.

Ayo Adun Foundation is a none profit organization created in memory of late Pastor Ayo Adun, a visioneer and the senior pastor of millennium Christian ministry Lokoja.

Some of the core aims of the foundation is to shine the light of God in the dark areas of society using love and social welfare as a major tool, to change and affect lives positively regardless of race, gender or religion and to showcase the love of God to the society through empowerment and skill acquisition.

At the Ayo Adun foundation our driving force is love and this is in line with the teachings and the life of pastor Ayo Adun, he was a selfless man filled with so much love for God and for humanity and this foundation is dedicated to keeping his legacy alive.