The group visited the Hon. Member to thanked and appreciated him for his unprecedented achievements recorded across the Constituency and Ajaokuta Steel Company and it’s environ. Worthy of note are his printable efforts on the revitalization of the  abandoned Ajaokuta steel plant as it was his support and effort that led to the visitation of the Speaker of the 8th National Assembly RT Hon. Yakubu Dogara and some principal officers to the plant which brought about the Memorandum Of Understanding (MOU) signed by the Federal Government and the original builders as recently some funds was released for the plant this is commendable indeed. 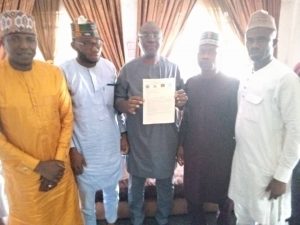 More so, the group eulogized him for his empowerment program within the territory and his gestures towards the payments of WAEC and NECO for the final year students in Schools across the territory , sharing of textbooks and furnitures to some schools are quite commendable .

The union Members also commended his efforts for citing the West African Ceramics Company phase 1 and 2 in Ajaokuta which has greatly improved the standard of living of the  good people of Ajaokuta and other part of the state and outside as more than 7000 people today are working in the company none of his predecessors has recorded such in the past  .

Based on the unprecedented achievements recorded so far the group unanimously endorsed him for continuity saying that a Ranking Member is far better than first timer in the National Assembly adding that Kogi State needs a Ranking Member for now to be able to influence some major projects to the state as the steel company is  the bedrock of industrialization of the country.

The Member thanked and appreciated them for the visit using the medium to intimate them that Ajaokuta Steel Company must work inshallah adding that he will never relent in his efforts in pushing for the revitalization of the plant .On the ceramics cited in Ajaokuta the Member said he is from Ajaokuta  and he can’t have opportunity of citing a company that will go along way to reduce youths restiveness without bringing it down home noting that employment is a major challenges facing the country today assuring them of the coming up of the phase 3 very soon.