In the words of renown activist, Ralph Nader, “The automobile has brought death, injury and the most inestimable sorrow and deprivation to millions of people.” 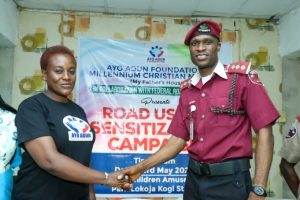 Mrs Betty Adun the CEO of Ayo Adun’s foundation in her address noted that the campaign was launched as an effort to commemorate one year memorial of the founder of Millennium Christian Ministry also known as My Father’s House, Late Pastor Ayo Adun who passed onto glory on December 26th, 2021 following an accident he had on May 23rd, 2021.

Betty went on to say that, given the times, safety and the necessity for it cannot be overemphasized, and that the future of safety movement depends more on improving means of educating people to the concept of caution and safety than on the design and production of these safety gadgets.

In a brief lecture on the topic: Road Crash Prevention and Causes, RC Ayodeji Michael, representing the central Commander of FRSC Lokoja, pointed out that Safety is a shared responsibility that everyone must take seriously.

He stated that there are three key causes of road traffic crashes: human, environmental, and mechanical factors, with overconfidence, distraction, overloading, tyre issues, and overspeeding being the most common. Drunkenness, lane indiscipline, traffic rule violations, night journeys, and other issues were highlighted, and road users were warned of the dangers.

“Safety don’t hurt but crashes does.”

The handover of safety equipment to the Federal Road Safety Corps, as well as goodwill messages from dignitaries in attendance, were the major highlights of the event.