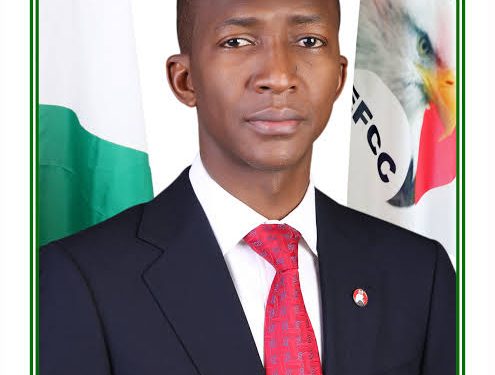 A Group known as Central Nigeria Young Professionals for Justice and Integration has given the Economic and Financial Crimes Commission (EFCC) forty eight hours ultimatum to publish the account opening process and other details relating to the nineteen point three billion Naira bail out it accused Kogi State Government of diverting.

The commission had alleged that the N19.3b Bailout money , which was meant for the payment of salary arrears in the state, was kept in an interest-yielding account with the name of the state as “Kogi State Salary Bailout Account.”

President of the Group, Barrister Moses Ejembi who addressed newsmen in Abuja on Wednesday also asked the EFCC to stop the media trial and politicaly motivated propaganda against Governor Yahaya Bello.

Ejembi requested the EFCC, if it is acting in the national interest, to address Nigerians within 48 hours.

The Group noted that EFCC does not need to belabour itself by embarking on a media trial advising the organization to publish the account opening process and the account mandate of the Kogi State Government.

He explained that if the money is in a fixed deposit account, EFCC can do well by publishing the certificate of deposit issued to Kogi State Government by Sterling Bank Plc.

Barister Ejembi said Governor Yahaya Bello has met the quality of the type of leadership Nigeria deserves and promised to stand by and defend him against attacks that appear to be politically motivated.

PRESS CONFERENCE OF ANTI-CORRUPTION NETWORK ON THE SAD TALE OF BAILOUT FUNDS IN NIGERIA BY SEN. DINO MELAYE
A PREPARATORY PRESS BRIEFING MARKING THE KICK-OFF OF INTERNATIONAL DAY FOR ELIMINATION VIOLENCE AGAINST GENDER AND 16 DAYS ADVOCACY AGAINST GENDER VIOLENCE.
Comment