The Obaro of Kabba in Kogi State, also known as Obaro Otitoleke Oweyomade I, Oba Dele Awoniyi, has called on the people to avail themselves for the Covid19 vaccines, describing it as effective and good for the Peoples health and well-being. 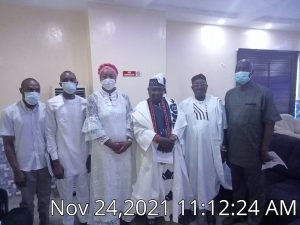 The Obaro of Kabba stated this when he received in audience
the  Executive Director, Challenge Parenthood Initiative, (CPI) Eunice Abimbola Agbogun, called on the Federal and State Government to ensure that the vaccine is readily available as more people of the area are now aware of its importance, commended health workers for reaching out thus far to his people in ensuring that they are vaccinated.

He commended health workers for the increase uptake of covid-19 vaccines in the country, pointing out that the people of his community have accepted the vaccines, asked them to make avail themselves for vaccination.

The Royal father said after presenting himself for the vaccination, it behooves on him to encourage others to do so describing the vaccine as safe and potent.

The Royal father commended CPI for the Initiative to ensure that Kogi State is made a safe haven for all citizens in the country, praised CPI for complimenting government efforts to fighting the spread of covid-19 which is currently ravaging the world today.

While noting that the campaign will help to address the myths and misconception associated to the uptake of covid-19 vaccines said having presented himself for the vaccine, made the clarion call for people of his community to avail themselves for the vaccination.

Earlier in her remarks, Mrs Eunice Agbogun  during the advocacy visit to the Obaro of Kabba, said as an opinion moulder, appealed to the Royal father to encourage the people to turnout enmass for the vaccination.

Also Read This:  Eid-el-Moulud: Hon. Danga Felicitates with Muslims, Enjoins all to Pray for Nation's Peace.

She said findings has it that many people are still reluctant to make themselves available for the vaccine, described the Covid19 vaccines as effective to take care of the ravaging effect of the Covid19 virus.

She called on to the need to step up the administration of the vaccines in Kabba LGA, lamented that health workers are poorly motivated which has also negated the success in the uptake of vaccines in the country.

The CPI Executive Director maintained that, poor remuneration of health workers in administering the vaccines cas slow down the uptake of the vaccines, adding that, when health workers are not motivated, they will be reluctant in discharging their duties.

The Executive Director said she is of the view that the government and opinion moulders owe it a duty to encourage people to avail themselves for the vaccination.

She explained that the country has been suffering from gross inequality in access of covid-19 vaccine but assured that efforts is ongoing to ensure that more of the vaccines are made available.

Mrs. Agbogun stressed that the objective of the campaign is to enhance awareness in the uptake of the vaccine and build stakeholders confidence in the fight against covid-19 pandemic.

The Vaccine and the advocacy she explained has the propensity to curtail the virus from high risk states since Kogi is a transit point to over nine States in Nigeria if everyone is vaccinated.