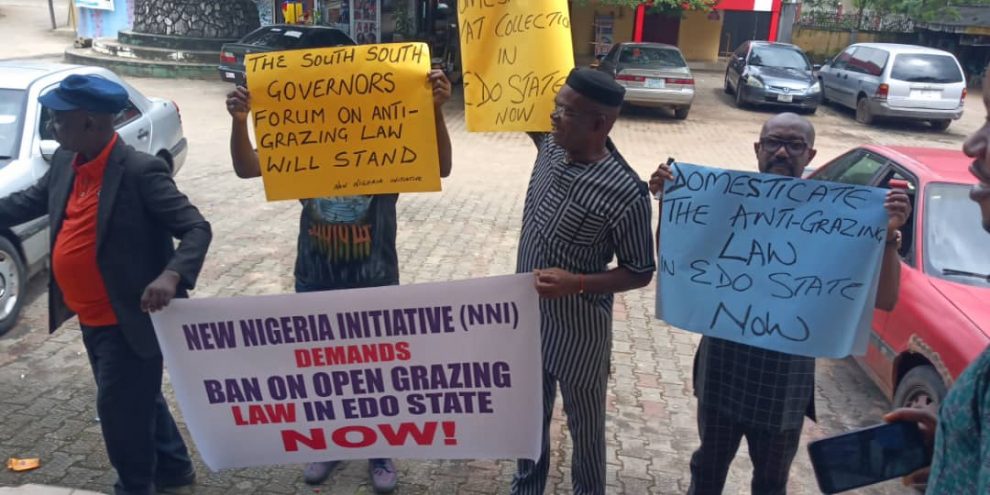 A Socio- Political group, the New  Nigeria Initiative ( NNI ), has called on Edo State governor , Godwin Obaseki to urgently pass  the bill  on ban on Open Grazing in the State;

The group in a protest  to  the  Nigeria Union of Journalists (NUJ) , Edo State council, wondered why the state government has refused to  pass the bill as agreed by the 17 Southern States  governors  in Asaba,  Delta State.

The protest statement signed by  Uwadiae Odigie, Chairman and comrade Ugbatako Nowinta, Secretary , condermed the delay in passing the bill.

They stated that,  the people are worried about the delay and asked ,  ” What Is Governor Goodwin Obaseki Waiting For?

“We are Moved by the unspeakable horror being perpetrated by fulani herdsmen, on the peaceful and law abiding people of Edo State, it is on record that the New Nigeria Initiative (NNI) initiated a bill on the need to ‘Ban Open Grazing’ in Edo State; and it has since been sent to the Edo State House of Assembly, 14/09/2021

“After waiting in vain, we made Spirited efforts to see His Excellency, Godwin Obaseki, Governor of Edo State, on the need for his intervention. At the end of the day Mr. Governor directed us to see the Permanent Secretary, in the Ministry of Agriculture Edo State.

“We were excited and elated when the Southern Governors Forum fixed September 1st, 2021, deadline for Governors in the area, to pass the law banning open grazing in their respective States.

“We have also been mounting pressure on the Speaker, Edo State House of Assembly, Hon. Marcus Onobun on the urgent need to pass the bill on ban of open grazing in Edo State; but all efforts have been abortive.

“Now it has been transparently and sufficiently established, that the Fulani herdsmen are the ones unleashing terror and fear, in Edo State, by the horrible and shocking cases of the late Jide Sowore and others; the recent kidnapping of the elder statesman, Dickson Imasogie; plus other isolated cases of kidnapping,

Now that many states within the South-South have responded to the September 1st, 2021, deadline; and the Fulani herdsmen are still ravaging our forests and highways with the fiercest brand of terrorism ever, with its attendant catastrophic consequences on our psyche, what is Governor Goodwin Obaseki of Edo State waiting

We are worried about the inability of Edo State Government to respond to this most cold blooded and calculating monsters: Fulani herdsmen, who have turned the state into a sanctuary for barbarism.

Our hopes are becoming evaporated in the face of this sadistic menace, even as we are convinced that Edo State House of Assembly and Governor Goodwin Obaseki will soon do the needful: to bring into urgent reality the ‘Law Banning Open Grazing in Edo State.

They appeal to the governor to be
on the side of the people and urgently pass the bill in the state.

Why Defecting to APC is Best Bet For Edo Deputy Governor In Becoming Governor in 2024
2023: Gov. Bello, an Exceptional Leader Nigerians have been searching for – Alhaji Abdulazeez Enesi Anuhi.
Comment