A call has been made to permanent Presidential Aspirants in Nigeria to have a rethink in 2023, as it is becoming obvious that what the Country needs now is a unifier like Gov. Yahaya Bello. 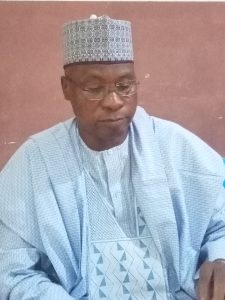 Alhaji Abdulazeez Enesi Anuhi a Chieftain of the All Progressives Congress in Kogi State made the disclosure in a press conference held in Lokoja today, said if governance is about the good and wellbeing of the people, disclosed that Gov. Bello has proven himself to be dutiful, competent and a worthy ambassador of the people.

Alhaji Abdulazeez Enesi Anuhi, explained that Gov. Bello remains an exceptional leader the country is waiting for when his achievements in security is juxtaposed with the current insecurity facing the country.

Alhaji Anuhi posited that Gov. Bello in terms of unifying a state that is a mini Nigeria has truly distinguished himself amongst contemporary Leaders, urged Nigerians to look in his direction for a secured Nigeria.

The APC Chieftain listed the recycling of of old politicians who have over the years Shown there faces in their quest for the nation’s leadership, as the bane of the nation’s democratic challenge, said in order to avoid the enermous harzard and pitfalls, Nigerians should look in the direction of a cerebral leader like Gov Yahaya Bello.

While disclosing that Nigerians can no longer continue to do the same thing over and over again, described 2023 as a defining moment for Nigerians in choosing the right leader for the desired result.

Alhaji Abdulazeez Enesi Anuhi, described Gov Bello as the much awaited Nigerian with the desired solution to solve the nation’s predicaments, appealed to Nigerians to look in the direction of Gov. Yahaya Bello.

The APC Chieftain lauded Gov Bello’s achievements in youths and Women empowerment, commended him for surpassing the 35% affirmative action to women, described the feat achieved by Gov. Bello as uncommon in the country’s history.

While pointing out that the outstanding performances of Gov. Bello in infrastructure is predicted on his robust and cognate experiences in the private, public service and corporate governance, urged Nigerians to look in his direction in 2023 as remains the nation’s hope amidst the numerous challenges.

He further commended Gov. Bello for delivering the dividends of democracy and implementation of his campaign promises to the people, noted that inspite of the noticed challenges, his developmental strides are visible to all and sundry, making him the beautiful bride in 2023.

While noting that the Governor has given a brilliant account of himself as a true advocate of a patriot and nationalist, described him as the hopes and aspirations of the new Nigerian as far as governance is concerned, insisting that he is the right man for the job.

We Reach the right people at the right time with The Nigerianpost Newspaper.

Kindly contact us for your advert placement or publication @ Nigerianpostnewspaper@gmail.com

… We @ thenigerianpostnewspaper@gmail.com, we’re reliable, with a wider reach; we break the news.