Hon. Henry Ekundayo Akanmode, popularly known and called Dayo Akanmode is an uncommon human-diamond, a valued human asset,  a deep-thinker with an elevated mind, an acclaimed gentleman of the Kogi-West politics, and by extension, Kogi State in general; a reputable political figure greatly esteemed for his dignity, high public rating and loved for his personal character integrity, is a prince of the very famous Akanmode royal dynasty of Aiyetoto-Gbedde, Ijumu LGA of Kogi State. He was born on August 25, 1960.

He had his elementary education at the L.G.E.A School, Aiyetoro-Gbedde between 1969 to 1974;  his secondary education was at the famous St. Augustine College Kabba from 1974 to 1979 (where he served as the School Library Prefect in his final year), and he later advanced at the Kwara State School of Basic Studies between 1980 and 1981, bagged a Bachelors of Arts (English) and capped it up with a Master of Industrial and Labour Relations at the University of Ilorin in 1986 and 2009. He also holds a certificate in Computer Studies (2009).

He had an early exposure to the intrigues and nuances of the political turf by serving as Visitors Aide at the Kwara State House of Assembly between 1981 and 1983. Thereafter, he worked with Osprey Clark Nigeria Limited as Site Administration Manager from 1987 to 1988 before moving to Fate-Tanke Community Bank, Ilorin where he worked meritoriously for four years as Credit and Risk General Service Officer on account of his demonstratable virtue of integrity and dilligence.
He thereafter worked as the Managing Director, Sam-Ak International Nigeria Ltd from 2000 to 2010, after which he contested and won election and served as Vice-Chairman, Ijumu Local Government from 2013 to 2016, which turned out to be a remarkable epoch in his political life during which, his manifest innate character vitues of integrity and public-spiritedness  became manifest and widely acclaimed.
He has also served at different times, on the board of some successfully run private enterprises namely: Gamut Ventures Ltd, Solid Trading Co.Ltd, Henri-AK Nig. Enterprises and The Niche Tourist Resources Ltd.
Dayo Akanamode served with high commendation in notable political and social development positions such as being the National Secretary of Ijumu Development Movement (IDU) between 2008 and 2011, as well as Secretary, Ijumu Consulstative Forum during that period. He is a high-value political player, one that many politicians woud always love to have in their camps due to his huge socio-political capital, vast contacts and network.
As a grassroots political mobilizer with wide acceptability and tremendious goodwill, he has severally and joyfully built political structures and deployed them unconditionally to the service and benefit of many political office seekers. In specific terms,  a number of some elected political office holders who are presently holding key political offices in the Senatorial District owe a measure of gratitude to him for selling their candidacy to major Okun leaders and political stakeholders at the points of their entry into the Kogi-West politics by serving as their canvasser, gate-keeper  or campaign coordinator at different epochs.
The hallmark of the political orientation of Dayo Akanmode is honesty – he is one politician that many aspirants and candidates easily and readily trust when it comes to loyalty to a cause and the promotion of the greatest happiness of the greatest number. Dayo Akanmode is in the true sense of the word, an epitome of altruistic service and he is a chief advocate of politics with human face. As a man with a heart for God,  he is a friend of all who freely relates with people across different social strata and demonstrate goodwill and large heartedness to all annd without malice to none.  As a true lover of the people and a passionate community organizer, he is is a member of a number of socio-political organizations such as: Aiyetoro-Gbedde Development Association, Aiyetoro-Gbedde Elite Club, Okun Development Association (ODA) and Kogi Unity Forum.
In his about 30 years active political trajectory, Dayo Akanmode has succeeded in carving a noble and enviable nuiche for himself as a reliable politician and a very personable jolly-good fellow, a stable character and a great soul with a gentle mien and an endearing persona that always exudes love and charm.
Dayo Akanmode possess in good measure,  cutting-edge virtues and core strength, all of which combined, have helped him in building so much huge social capital over time. They include but not limited to: transformative and motivational leadership, ease of bridge-buiding, capacity to rally people for consensus-building, participatory managment for goal-attainment, mentoring and life-coaching skill, broad worldview, management by objective, strategic planning an human resource management skill, financial management skill; project management, sound budgeting and cost management skill, superb human relations and fantastic interpersonal skill. His capacity to practically apply the foregoing skills for goal-attainment defines the greatly admired snd widely celebrated Dayo Akanmode essence.

Also Read This:  The insecurity situation in Nigeria.

As an exemplar of good family man, Dayo Akanmode is happily married to his elegant and lovely better half – a university don, Olushola Akanmode PhD, and their  marriage is blessed with goldy children. He utililises his leisure time in idea synthesis, interrogating, analyzing and sharing  his thought and pespectives on current affairs and topical national issues, enjoying classical music, and engaagig in voyages of discovery. He also enjoys playing table tennis to keep fit.
In today’s political terrain of Kogi-West and the state in general, Prince (Hon) Henry Ekundayo Akanmode is widely regarded as an ideal and cosmopolitan politician and leader that is well primed for the times considering his vast political experience, humane nature, humility of heart, passion for human development, commitment towards making a difference in the lives of the people, and his heart for God. His coming into the political equation and becoming a frontline player in the 2023 power calculation in Kogi State, as well as the positive reviews and  comments that his personality is currently enjoying is clearly positioning him as the much desired  breath of fresh air in our dispiriting political landscape and a beacon of hope that good things are in the horizon for Kogi the confluence state, in getting it to the right direction towards unleashing its potential greatness for the good of all Kogites.
He is very passionate and deeply committed to engendering a political culture of true service and raising the bar of development politics by changing the unpleasant prevailing narrative of self-serving politics driven by hedonism and governance by propaganda to politics for the common good and enthronement of good governance regime anchored on social contract and driven by transaparency and accountability towards the promotion of the peoples well-being. 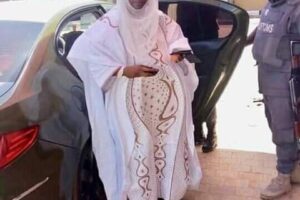