Kogi State Governor, Yahaya Bello has appealed for support in the areas of establishing an airport in Kogi as well as the dredging of River Niger up to Lokoja in order to boost the economy of the State and country at large.

He disclosed this to State House correspondents after
meeting with President Muhammadu Buhari at the Presidential Villa.

He also stated that the Youths of the state are happy with President
Buhari’s introduction of various social investment programmes aimed at eradicating poverty among Nigerians.

He said “I paid a visit to the President to brief him about the
confluence state, the development and challenges we are facing and
also to convey a message form the people of Kogi State that the social
bond between the government and the governed is still very strong.

“Also, I informed the President that the Youths of Kogi State are expressing their appreciation to the President over the various social
intervention programmes that are geared towards lifting the youth and
women out of poverty,” he said.

“I also made a demand to the President that he should please ensure that the pronounced airport to be established in Kogi State be looked into when funds would be released, let Kogi be the first.

“I also drew the President’s attention to the dredging of River Niger
from the high sea to Lokoja, up to Baro if actually we want the
economy of this country and of the North to prosper.”

Bello said the state has not introduced bread tax in Kogi as being
speculated but those behind the purported law would soon be unmasked and punished accordingly.

“The incident of bread tax in Kogi State is the most unfortunate
infraction that any right-thinking human being would allow to fly.
When I assumed office on 27th of January 2016, I inherited a decayed
civil service and I embarked on massive reform of the civil service.

Also Read This:  Ehebe Women Executive Pays courtesy Visit To GYB Cabinet Members in Appreciation For Nominating One of their own As Okene Local Government Vice Chairman

“Before now, the civil servants in the state don’t follow the public
service rules or the financial regulations. A similar incident
happened within this period of COVID-19 where two Permanent
Secretaries decided to take the laws into their hands and wrote a
letter to worship centres, demanding that fumigation of the worship
centres be paid for despite the fact that it was a service that Kogi
State rendered free of charge and those Permanent Secretaries have
since been dismissed from service.

“The particular incident of bread tax is being looked into as I speak,
we are investigating those that are behind this. It is evil and it is
unaccepted, to say the least.

“I have ordered the Head of Service to issue queries to those that are
responsible and they will face the law accordingly. This is a State
that never locked down over COVID-19 but our economy was badly hit because all our neighbours; ten State including the Federal Capital Territory locked down.

“If I didn’t lock down to subject my people to hardship, why should I
because of tax or hardship impose additional hardship on them by
paying bread tax? If there is a way, I can even give tax holiday for
some of our businesses, I will do that, not to tax bread.

So, the Permanent Secretary concerned is facing disciplinary action and we are going to communicate to the world at the end of the day. I never ordered that and I don’t think any senior member of my cabinet will order such,” Bello said.

The governor also announced that his administration had since
launched a post COVID-19 relief package of over N1.56 billion for
citizens of the State, to cushion the effects of the pandemic.

He, however, noted that there was no COVID-19 in Kogi, buttressing his
earlier stance of the pandemic. 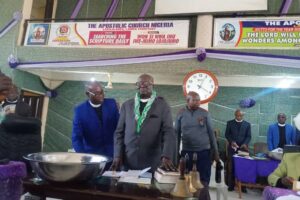